Brexit is the new excuse for Austerity

Millions of voters, on both sides during the EU referendum, voted in the hopes of saving the NHS. One year on, the NHS is deep in crisis. The NHS has a staffing crisis, a funding crisis and increasing impacts from cuts to other services like social care that multiply the number of people going to the NHS and the length of time they stay in healthcare. We should be outraged, but we shouldn't be too surprised. 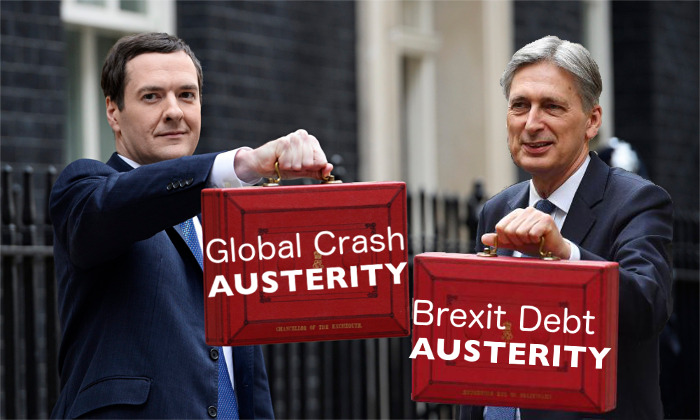 Before the EU referendum, George Osborne warned that he would have to cut funding to public services if the UK voted to leave the EU. This was roundly shouted down as 'project fear' by the official Leave campaign and supporters, and shortly after the referendum, Osborne lost his job as Theresa May took over the government.

Yet, despite growing concerns over the NHS, Theresa May stated firmly in October 2016 that there was 'no extra money for the NHS' from Brexit or other sources.

The new Chancellor, Philip Hammond, made his first budget statement in November 2016 - and made absolutely no mention of the NHS in his entire speech and budget document. Instead, he mentioned a Brexit debt bomb of £122bn more borrowing. More borrowing means more debt, means more Austerity, his budget said.

Over the winter the NHS was hit hard. Hospitals were told to stop performing operations just to free up beds, including for cancer patients. Patients were sent straight to the private sector, paid by the NHS budget. Patients literally died in the corridors as they waited dozens of hours to be seen. Eventually, the Red Cross declared a 'humanitarian crisis' and had to step in.

It has been said that the NHS is now in 'perpetual winter' - the annual increase in demand never diminishes. Some hospitals have 'corridor nurses' because that's the only place they can treat patients. The vast majority of NHS hospitals are experiencing 'unsafe' levels of staffing. There has been a drop off in EU nurses applying to the UK since the Brexit vote, of 96% - surely not what any voter wanted, and surely a nail in the coffin of our NHS.

Hammond's second budget statement, in Spring 2017, saw him utter the words, "we are the party of the NHS" - then fail to give the NHS a penny. He did give social care £2bn split over 3 years. But after 5 years of 9% real-terms cuts to the social care budget, this doesn't come any where near the £2.5bn per year that experts say is required.

Some might say this is because we have a Conservative government and it's the Conservatives that are souring the land of milk and honey promised by the Leave campaigns. Yet while most Leave voters wanted to protect the NHS, most UKIP and hardcore Leave leaders are ultra-Conservatives that have long wanted to do away with it. This was part of their Brexit plan all along. 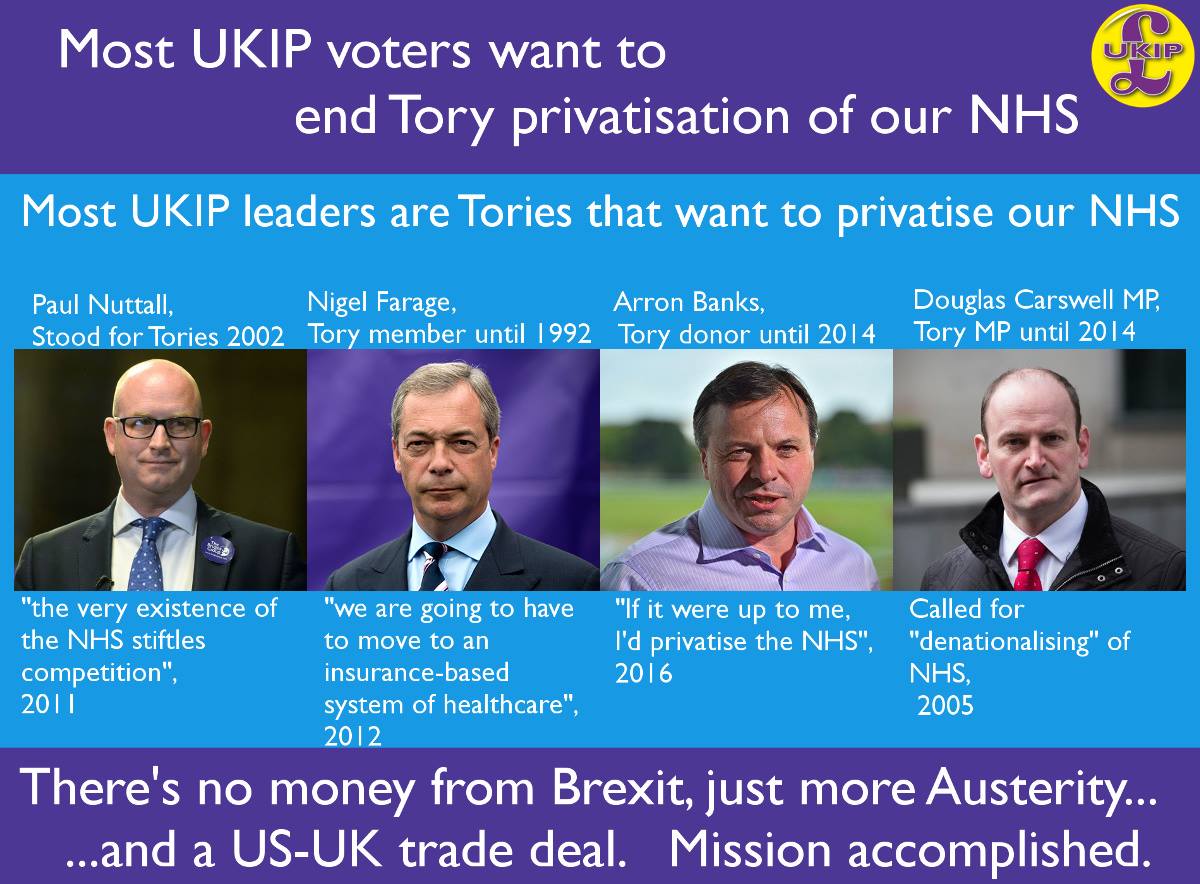 Millionaire Arron Banks was the main funder of Leave.EU and a long term funder of UKIP and, before that, the Conservative Party. He said in 2016, "if it were up to me, I'd privatise the NHS." Nigel Farage, famous leader of UKIP, was a member of the Conservative Party until 1992 when he left to form UKIP, and said in 2012, "we're going to have to move towards an insurance-based system of healthcare", something he maintained in 2015. Nigel's short-lived replacement as leader of UKIP, Paul Nuttall, stood for the Conservatives in 2002 before lurching to the right with UKIP. He said in 2011, "the very existence of the NHS stifles competition" and "I believe that the NHS is a monolithic hangover from days gone by." UKIP's one MP, Douglas Carswell, had been a Conservative MP until 2014 when he switched to UKIP (he's since switched back), and in 2005 he put together a policy booklet that called for 'denationalising' the NHS. His co-authors included Jeremy Hunt, Michael Gove and other top-Tories, including the Brexit 'intellectual', Daniel Hannan - an MEP who has appeared on Fox News to say that the NHS was a 'mistake' that 'made people iller.'

For these Brexit leaders, Osborne's warning about Brexit Austerity was exactly what they wanted. A weakened UK economy means more cuts to public services and a massive swing towards a US-style economy. Lower regulations, lower standards, lower worker rights... these were all synonymous with the US economy and promised by various Brexit leaders as 'benefits' of Brexit. Food for thought as a weakened Theresa May sidles up to Donald Trump, desperately seeking a trade deal.

Hammond has just recently stated that the UK is 'weary of Austerity' and that his party needs to pay attention to the recent General Election result. But he said he'd scale back Austerity back in 2016 when he took the job and we've seen nothing but hardship and damage for the NHS since. Theresa May still maintains that Conservatives are "the party of low-tax" and Brexit still means more debt, so where would Hammond get more money from? Osborne's plan was always for a low tax, low spend government, his plan was shared by Brexit leaders, and no one has changed that plan.