My name’s Jeremy, I’m an A+E Doctor and I will be marching on March 23rd for a People’s Vote.

Brexit is damaging our NHS. We’re losing vital EU staff at a time of desperate staff shortages and that means patients are waiting longer to be seen and treated. Since the Brexit vote, EU nurse applicants have dropped by 96% and we don't have British staff to replace them.

Our economy is in decline with Brexit now costing us £800 million a week. After Brexit, we’re likely to see more cuts and hospital closures through prolonged austerity.

And a potential U.S. trade deal could see the NHS opened up to American corporations. U.S. negotiators have made clear in their CATO trade blueprints that they want access to the NHS in exchange for a deal; that means we could see American corporations buying up parts of our NHS and even a fully privatised health service in the future.

Many people voted Leave to help the NHS. Now that we know Brexit is actually damaging it, the People deserve to vote again. So please, if you care about the NHS, join me and hundreds of thousands of others on March 23rd to support a People’s Vote and to help save our NHS.

RSVP FOR THE MARCH HERE 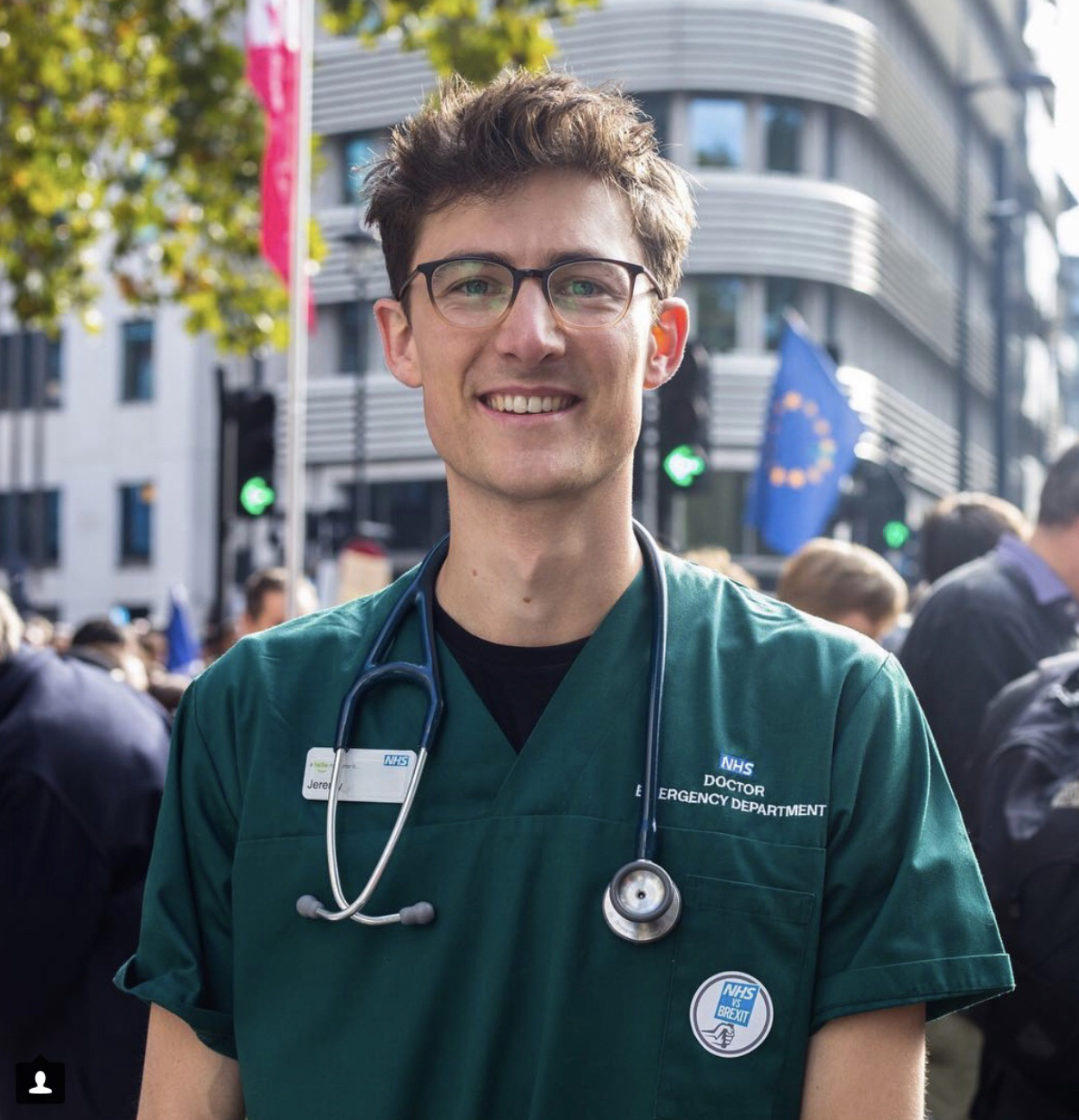 Was Brexit the biggest scam in NHS history?

Just before the June 2016 referendum, the Leave Campaign sent a bus around the country bearing slogans which claimed that the money saved by not paying our annual EU contribution (£8 billion) could all be spent on improving the NHS.

But, although we haven’t even left yet, the NHS has already lost a potential £50 billion. This happened because until the referendum our annual rate of economic growth was a healthy 2.7%, much the same as in the other G20 countries. Immediately after the vote our annual growth rate fell, alone among the G20, to 1.4%.  In the following year the gap between the UK and the G20 narrowed but there was still about 0.5 of a percentage point gap. All of this was caused by businesses putting their growth plans on hold due to uncertainty caused by the vote to leave.

Since, according to the Institute for Fiscal Studies, each 0.5 percentage point drop in our annual rate of growth costs the Treasury £20 billion, we have lost at least £50 billion since the referendum, all of which could in principle be spent of the NHS, according to the Leave campaign’s own arguments. And there is worse to come, because the Governor of the Bank of England estimates that UK growth will fall to a lowly 1.2% in the event of a no deal Brexit. Since the Leave campaign knew that growth would fall in the event of a Leave vote, their claim that leaving the EU would benefit the NHS must be the most successful scam in NHS history, especially as it is known to have influenced a number of undecided voters.

The consequences for individual NHS patients like myself can be severe. Since the referendum, I have been registered as severely visually impaired/blind and so need electronic smart glasses to lead a normal life. However, a pair costs £2500 each and are therefore not available from the cash-strapped NHS. And it is much worse for those denied life-saving medicine, like the recent scandal over the withholding of drugs to treat cystic fibrosis.

If the Brexit madness continues, the Government will have to choose between abolishing the NHS, raising taxes, slashing other public services such as education or the police, or borrowing even more money to add to our huge National Debt. It is high time that the Leave campaign admitted the huge damage which they have already done to public services in this country.

I'm an NHS consultant, and I am deeply worried about the effects Brexit will have on our health service.

Everyone in this country depends on the National Health Service. Over a million people use the NHS every 24 hours, and more and more people every year are living with long term conditions.

I work as an NHS consultant, and I am deeply worried about the effects Brexit will have on our health service. We are already stretched to the limit by years of inadequate funding, and Brexit in any form is likely to make things much worse.

Brexit comes at expense of the rare disease community

According to the old adage, you never know what you have until it’s gone. This is certainly true of health and our NHS. As a result of Brexit, we are already suffering substantial losses and worse may be yet to come.

If our predictions become reality, healthcare and research for rare diseases will be an early casualty of Brexit. Members of the rare disease community are already beginning to feel the impacts and to understand the imperative for protecting research and care. There are over 6,000 rare diseases affecting an estimated 3.5 million people in the UK; that’s 1 in 17 of us. If you don’t personally have a rare disease, then remember that your loved one, family member, friend, colleague, your future child or grandchild or your neighbour does. Everyone needs to care about this issue because it does, or will in the future, affect every single one of us.

Many rare conditions are severe and life-changing. Three quarters of rare diseases affect children. Delays in diagnosis, misdiagnosis and hurdles in accessing expert help and coordinated care are familiar experiences for many patients. Much of the progress in rare disease research and care is owed to the UK’s ability to strategically collaborate with countries across Europe. Brexit threatens every aspect of this collaboration.

We have already lost, as a direct result of Brexit, the UK’s leadership of 6 of the 24 European Reference Networks (ERNs). The ERNs draw on the expertise of doctors and researchers at 900 specialised healthcare units located in more than 300 hospitals across 26 EU and EEA countries.

Our self-expulsion from the EU’s medicines regulatory system, the European Medicines Agency, and the incentives of the centralised process for medicines approvals could be the difference between UK patients being able to access new treatments or not.  Rare disease medicines are trialled on a multi-national basis - there being too few patients in a single country in most instances to make single-nation trials viable. Being part of the EU has cemented the UK’s pole position for the launch of new medicines, being either first or second (after the USA).

The damage done to our ability to access funding for international collaboration with EU27 partners will impact negatively on the volume and quality of research outputs and participation opportunities. For most rare diseases there is no effective treatment. New medicines bring hope and, where proven effective, save and transform lives.

It’s not only access to experimental treatments we stand to lose. Brexit has threatened our medicines supply chain. Medicines to treat complex rare diseases, particularly biological and advanced products, will be amongst the first casualties.

Genetic Alliance UK was steadfastly unequivocal before the referendum that a vote for Brexit would damage our NHS and the prospects for the 3.5 million UK citizens affected by rare diseases and their families. Now, two years on, we see little cause for optimism as the various Brexit scenarios are being played out and we hurtle towards 29th March 2019.

Brexit is bad for the rare disease community, and bad for the UK's health. This is why we need a People's Vote.

P owns a business which supplies medical kit like syringes and sterile gloves.

When my brother and I started our company in 1997, the world was a very different place.

We both needed a new career path, and the idea to start our company was hatched - I came from the trading floors of the city and he came from a role as a medical rep. We hired an office on a small business park and started calling potential customers and suppliers: that was the start of our business journey.

Another huge, huge thank you to everyone who came to the People's Vote March for the Future on Saturday! It was a fantastic day, with 700,000 people marching in the sun to show support for a People's Vote on the final Brexit deal.

Newsletter from 19th October 2018 - the day before the big march!

"I am writing here because I want the NHS to survive."

Anette Pollner, EU citizen and ex-NHS staff member, writes about her fears for Brexit's effect on the NHS.

Brexit will be the end of the NHS as we know it. I think that’s pretty clear now.

Certainly, in the event of a no deal Brexit, plans have emerged to change the NHS to an American style private insurance system. Even if there is a deal, funding for the NHS will be severely cut because of the dramatic downturn in the UK economy that will follow any deal that is now being discussed.

In other words, it will be the end of the NHS.

The end of the most exceptional heath service in the world, a service that is part of my life in many ways.

With conference season over, we're now only six weeks away from Theresa May approaching Parliament with a fully-formed deal backed by the EU. I think I speak for everyone when I say "yeah, right!"

"The delays at ports, the extra tariffs... Brexit has the potential to be catastrophic"

A business owner which supplies medical products like swabs, needles, and surgeons’ gloves to smaller organisations tells us why he's fearing for his business in a post-Brexit world.